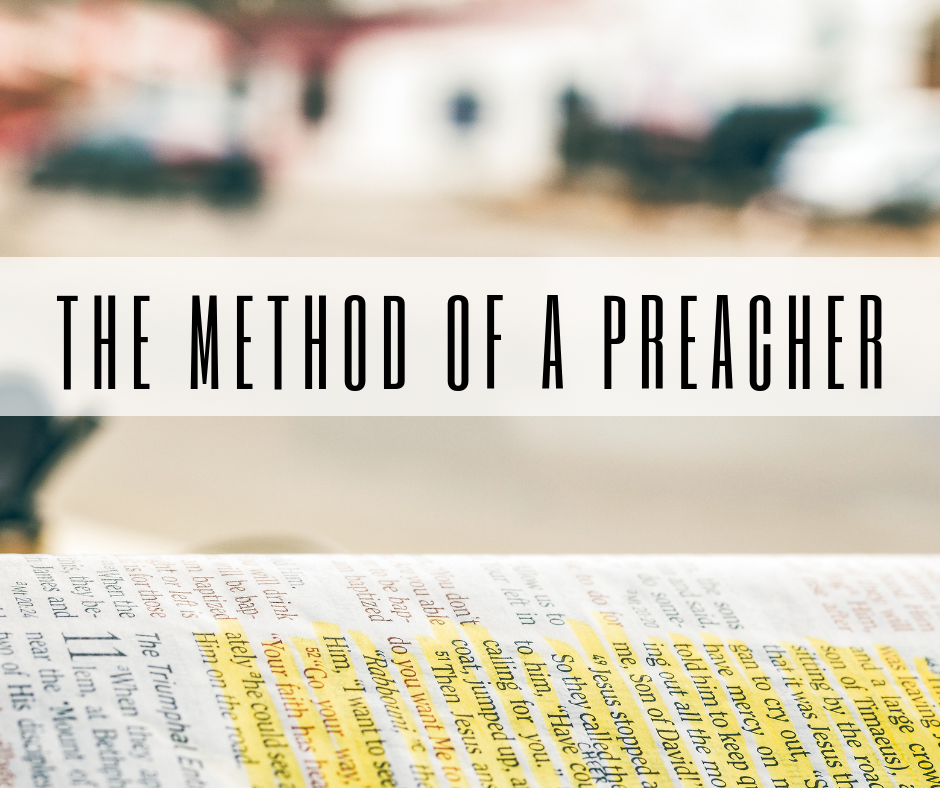 A Note to the Reader

While the vast majority of people reading this blog series will never preach a sermon, this series on preaching is for you. My goal is not to teach you how to become a Gospel preacher through this four-part series, my goal is to teach you what a faithful preacher should be. Why?

First, because I do not want any of you to end up like lambs being led to the slaughter under the leadership of wolves. And there are legions of wolves out there. My aim is for you to know what a Biblical preacher should be so you can evaluate the leaders in your life and hold them to a Biblical standard.

Second, because this is the culture we want to create at the Shepherd’s Church. Any man who preaches the sacred Word of God at this church must be submitted to the Biblical vision of what a preacher must be, myself included. This blog is for anyone who happens on our site but it is specifically for our people so that they will remove me if I deviate from this vision.

THE METHOD OF A PREACHER

In Part 1 of our four-part series, we talked about Paul’s answer to what a Christian preacher is called to. This week, we will discuss Paul’s four-part answer to how a preacher is to conduct himself as a herald of God’s Word. This goes beyond the content and calling to the method a faithful minister of the Gospel will use to deliver God’s truth to his people.

“Preach the Word, be ready in season and out of season; reprove, rebuke, exhort.” - 2 TImothy 4:2

1. Preachers are Called to be Ready

Truth is not seasonal, although people’s reaction to truth is. At various points in history, people have humbled themselves and were ready to hear the truth from God’s Word, believe it, and receive it. These seasons are often called revivals. At other times, people seem almost violently opposed to it. They attack its legitimacy, they attack all those who hold to it, and they especially attack those who will proclaim it. And, as history bears it out, this does not just come from those outside of the church, but most often it comes from the men and women within it.

What Paul is saying is that a pastor must preach the truth, not only when it is convenient for him, but also when it is detrimental to him. A pastor must be prepared to speak the truth as God reveals in Scripture, even if it costs him his reputation, even if the church doesn’t grow, even if people leave disgruntled, even if - as is the case in some corners of the world - it will cost him his life! We need this kind of man to preach the Word!

When you consider the kind of pastor that you are going to sit under, you must ask, what is his relationship with truth? Does he have a habit of sharing what the people want to hear? Or, does he share the truth as God reveals it in Scripture regardless of the costs?

2. Preachers are Called to Reprove

While the vast majority of sermons these days are focused primarily on encouragement, which has its place, Paul begins with reproof. What is reproof? Well, in the Greek, this word means to show the evidence of someone's sin so that you can convince them of their need for repentance.

Paul assumed that the starting point of a Christian message was not the goodness of man or that all man needed was a religious pep-talk to get him through. No one is good! Paul assumed that what his hearers needed more than anything was to be convinced of how sinful they truly were so that they would run unreservedly to Christ!

To preach a message, and to not bring up our utter inability to live the Christian life, is to do damage to the text, to dishonor the Spirit whose role is to convict the world of sin (John 16:8), and to fill our heads with the kind of folly that leads unregenerate men to hell. The whole point of Christianity is that we cannot save ourselves because we are sinners in need of a savior! Therefore, the church must raise up men who are led by the Spirit of God instead of held captive by the opinions of men. We need godly men who have the courage to follow Christ, and stand on His Word, even if it costs us our ministry. We need men who will reprove us.

When you consider the kind of pastor you are going to sit under, you must ask, does this man preach that I am a sinner? Does he hold my feet to the fire of God’s Word and upholds that only Christ has met its demands? Or, does he take the Bible out of context to keep me comfortable and to placate me in my sin? Choose wisely on who you will listen to.

3. Preachers are Called to Rebuke

Along with reproving, preachers are also called to rebuke those who hear their messages. This may sound overly harsh to you, but since it is Biblical we must understand what it means. In Greek, the word for rebuke is similar to reproof, in that both words have to do with a pastor’s role in calling out sin. The difference is that reproving is meant to lead a person toward the act of repentance, while rebuking is meant to stop a person from committing ongoing sin. Rebuke is committed to the sinner stopping a sinful action, while reproving is committed to the sinner starting a godly action. Both are necessary.

“for if you are living according to the flesh, you must die; but if by the Spirit you are putting to death the deeds of the body, you will live.”

You will indeed live and thrive under that kind of ministry, even if it is hard for your flesh to hear it.

4. Preachers are Called to Exhort

Finally, preachers are called to exhort men and women in their sermons. This simply means that a pastor must urge people forward in their walk with Christ, call them to holiness, and encourage them toward faithfulness. Now, let me be clear, this urging is not a plea for soft-handed legalism which issues commands for people to obey God in order to get something from God. This urging comes from the simple truth that we already have everything we could ever need or want in Christ, therefore in light of that gift, we should live differently.

A faithful man of God will not only tell us the bad news of who we are - wretched sinners who cannot save ourselves - but he will also tell all of us who are in Christ the glorious news of who Christ is! He will first let that glorious Gospel work on Him, expose him, convict him, and reshape him and them he wilL come with all the boldness and passion his body can muster to tell us of a savior who really can rescue us and remake us in His image! A faithful pastor will call us to follow Christ and adore Him!

When you look for a pastor, make sure he employs the full method of Gospel preaching. Ensure that he is a man who is always ready to share God’s revealed truth to God’s chosen people. Make sure he has the backbone to rebuke the people of God to stop sinning and to reproving them to repent and turn to Christ. And, finally, make sure he is a man who will urge the flock of God onward toward true Christian living by the power of the Spirit. Anything less than this is not a Biblical preacher according to Scripture.