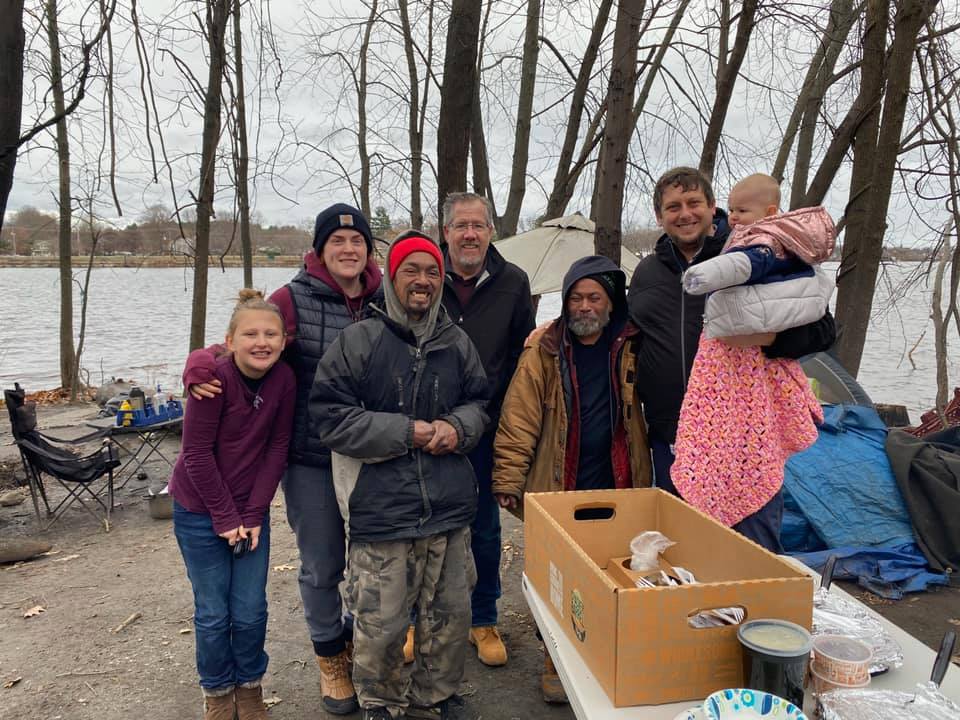 This year, The Shepherd's Church was eager to feed 7 families for Thanksgiving. It was our goal to feed families in Tewksbury who could not afford Thanksgiving or who might not be able to prepare a meal for their family. But... The Lord had other plans! He says in His Word that His thoughts are higher than our thoughts and His ways higher than our ways. We got to see that play out this Thanksgiving!

In church last week, I mentioned during the announcements that we had not found any families to feed. And while we were hoping and praying that God would provide those families to us, He provided something different.

On Monday, Shannon received a call from a man named Rocky, who we had reached out to the week prior. Rocky is the executive director of the Clean River Project, which is an organization tasked with ensuring the Merrimack River is clean, free of trash, and devoid of dangerous chemicals. Rocky has been doing this since 2005 and is based in Methuen. The Clean River Project over the years has grown and is now involved in most of the towns that the river flows through and his organization is singularly responsible for new legislation in many towns that will provide health to the rivers and the Merrimack region for years to come.

One of the ways that Rocky has improved the trash and pollution on the river, is by partnering with the homeless populations who live on the river banks. Rocky and his team deliver trash bags to the camps on boat, collect the waste, and even empower the men and women living there to clean the camps, which are usually filled with debris and waste. According to Rocky,

"this kind of work brings dignity and value to the guys. No one wants to live in trash, but when life deals you a bad hand, you kind of get stuck. By encouraging them to clean, and by working right alongside them, you give them a sense of purpose. You give them a glimmer of hope."

In fact, this is actually how Shannon found out about Rocky and his organization, from this article in the Lowell Sun. Rocky had empowered three local Lowell homeless men, Joy, Jun, and Em, who live on the river to join him in his efforts to clean the shoreline. He pays them, provides meals for them, and gives them a sense of belonging and purpose in the work he asks them to do. We were both touched! And it was there that Shannon and I decided to reach out to him to see if there were any opportunities for The Shepherd's Church to get involved.

Rocky called Shannon back on Monday and in the course of the conversation she set up a meeting for he and I on Tuesday. I met him at McDonald's on Varnum ave in Lowell, and he was more than excited to tell me what the Clean River Project does and what it stands for. We also jumped in his truck and rode down to the campsite, that was tucked secretly into the woods, where I met Joy, Jun, and Em. I had actually ridden by this spot a hundred times and had no idea that anyone lived on the shores below.

Rocky brought along with him a bag filled with clothing and boots, to which the men were overjoyed to receive. I watched as Rocky, a no-nonsense New Englander, looked more like a father than an executive director. He was warm, kind, and compassionate to these men, appearing as a sort of Santa Clause for the broken, bearing gifts to those this world had forgotten, it was a beautiful moment.

As I introduced myself to these men, the Lord convicted me that these were the men God had picked out for us to help. At that moment, I understood why the Lord had not provided any families for us to feed in Tewksbury because He wanted us to feed this little community on the river in Lowell!

When I got home, Shannon ordered a meal for ten from Cracker Barrell, and on Thanksgiving, we picked it up, warmed it in the oven, and a few of us delivered this hot wonderful meal to these three and for the entire homeless community who lives on the river. We knew this was what God wanted us to do, and we thought we would be the ones serving them, so we set up the table, set up the food, prayed for the meal, and waited for the men to jump at the feast set before them. But they did not jump.

Instead, I saw them serving us. For instance, my daughter Hailey was shivering, and Jun invited her to sit on a milk crate by his makeshift little fire. He used his own wood from a very low supply to warm her. Em spent time talking with Graham and telling him stories, which thrilled my son. But, perhaps my favorite moment was when Joy looked up, he saw Addison's lip quivering and that her hood had fallen down. I saw him hesitate, almost like he was not sure that he had permission, but then reached out with his worn and weathered hands to pull her hood back over her head.

I almost teared up right then and there. Here is a man that the world doesn't even know exists, who may have every reason to be bitter at the hand he was dealt, who is looking at a child that was momentarily cold while he will be cold all day, and at that moment all I saw was the sweetest look of care and compassion. At that moment he just loved her. He served her. And instead of us blessing Him, he was the one blessing me.

I do not share this for us to get any attention or glory. I share this only to raise awareness. That there are people living out of sight and out of mind who are going without this year. There are people fighting the cold and regardless of how they got there, we have an opportunity to care for them and meet there needs. As Christians, we serve a God who cares for the needy. As Christians, we know that God rescued us when we could not save ourselves. And as Christians, knowing this, we have every right and responsibility to share that same love with others.

“Then the King will say to those on his right, ‘Come, you who are blessed by my Father; take your inheritance, the kingdom prepared for you since the creation of the world. For I was hungry and you gave me something to eat, I was thirsty and you gave me something to drink, I was a stranger and you invited me in, I needed clothes and you clothed me, I was sick and you looked after me, I was in prison and you came to visit me.’

“The King will reply, ‘Truly I tell you, whatever you did for one of the least of these brothers and sisters of mine, you did for me.’ - Matthew 25:34-40

When we care for others, we are really loving, serving, and caring for Him!