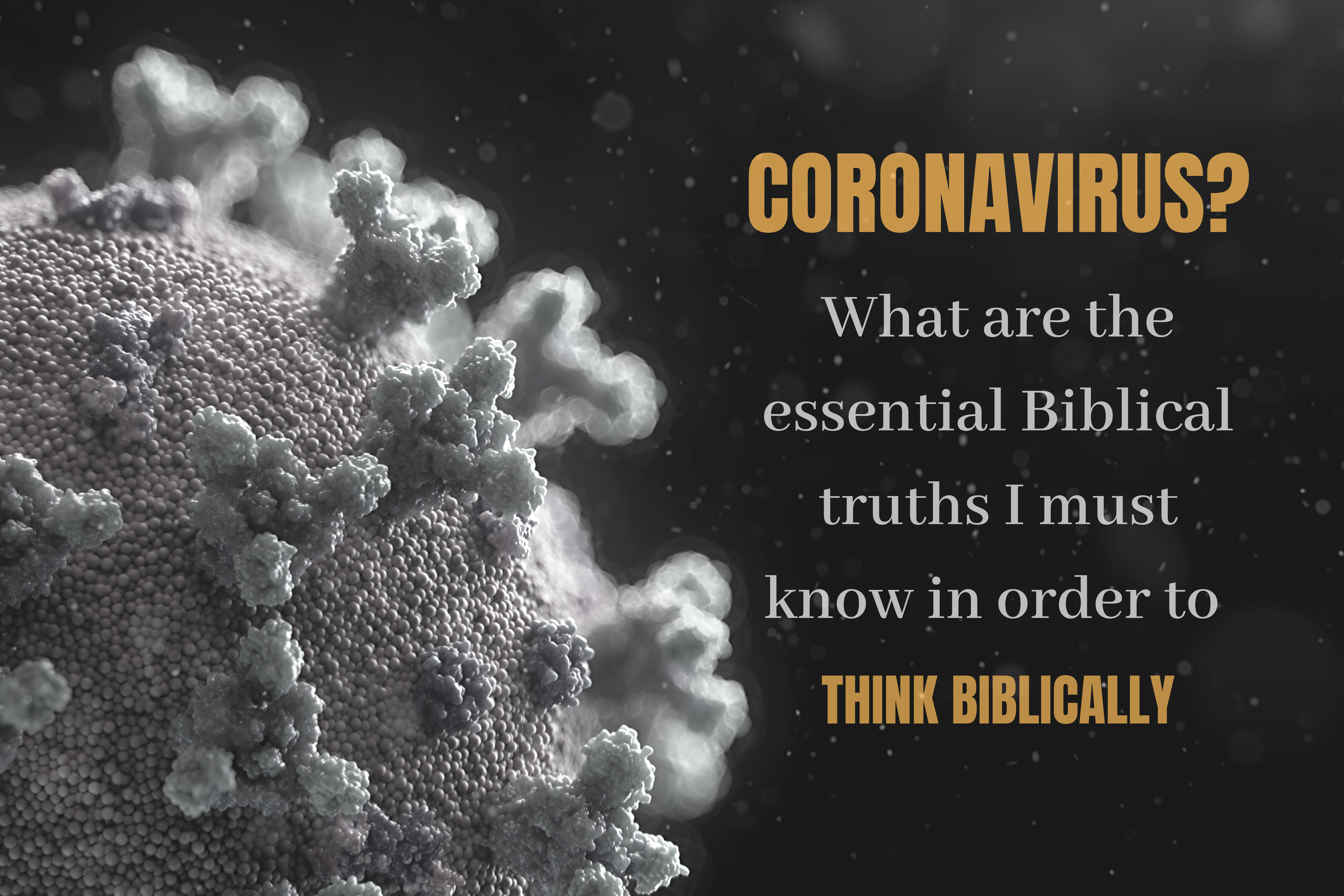 I am often accused of speaking in hyperbole. But this is not a hyperbolic statement. If you want to understand and have a Biblical view of the Coronavirus (and everything else), you must understand the entire Biblical story. What follows is a brief summary. If you want to think Biblically, then read what foolws, understand it, and then rest in it.

With that, we begin at the beginning...

In the beginning, God created all things good (Gen. 1-2). He made everything from the distant galaxies to that nearby tree with beauty, perfection, and infinite intelligence. In regard to human life, He created cells that would not die, organs that could not fail, and bloodstreams that would never transport infections and diseases like the Coronavirus to our bodies. He created genes that would replicate without error and human beings who would live forever. Everything was simply good and worked just like it was designed.

Human beings had everything, except for one thing. There was a distinction between the creature and the Creator. Humans were designed they were not the Designer. And with that distinction in place, Satan slipped into their garden paradise, convinced them to turn on God, so that they could be gods themselves. They reached for the one thing they could not have and they lost everything.

Because of their sin, the fabric of the world and their experience with reality changed and it changed in three ways.

Instead of being in a relationship with God, they lost all access to Him. They were dead spiritually.

Instead of living forever in a vibrant world, thorns, curses, infections, and diseases set in. They were now dying physically.

Instead of their cells replicating with exact precision, variations became the norm. Soon a copy of a copy of a copy increasingly looked further and further from the original mold. Wrinkles set in. Knee and back pains developed. And mutant stands of viral infections popped up in that fallen world.

Because of their sin, the world had fallen. Because of the fall, things like earthquakes, tidal waves, Bubonic plagues, and Coronavirus all became the unexpected norm. And unfortunately, that norm applied to us.

While we were not the ones who originally rebelled, we inherited their rebellion. Our fallen minds still reach out to be like gods, wanting to make our own plans instead of following God. Like our first father and mother, we are spiritually dead and we are physically dying. And, in a very real way, our rebellion against God is what unleashed things like the coronavirus upon the world. We are culpable.

But, God decided to restore and redeem.

Immediately after humanity sinned, God promised to send a Savior (Gen. 3:15). This Savior would heal both the spiritual and physical death that humanity unleashed upon the world. And He would do that in three successive stages.

STAGE 1: Salvation Out Of Spiritual Death

In spite of their sin, God still loved these rebels. And while the entire Old Testament is the story of God offering them grace, His greatest act of grace came when He personally entered into the human dilemma to rescue them. And He rescued them just like this...

While humans lacked the ability to relate to God, He came as God in the flesh. He came as the one who had a perfect relationship with God. And in His 33 years of human life He did nothing - no sin, no rebellion, not even a thought - that would sabotage His perfect relationship with God. He walked with God like Adam did, yet perfectly without sin. And when He died unjustly and innocently, it was to finish what He came to begin. No human had ever been born without sin, who also died without sin. That is what Jesus Christ did!

And because of His manifold perfections, God raised Him from the dead and gave Him all authority, power, and dominion (Mt. 28:18). And with that authority, Jesus determined to share His spiritual life with spiritually dead sinners, so long as they would believe and put their trust in Him! And why wouldn't we? He had done what we could not do. Now, if we believe that, He will share with us what we could never earn; a redeemed and restored relationship with God!

After His resurrection, He ascended to heaven to rule. And upon arrival, He commissioned His Spirit to go into all the world-saving His elect people from every tribe, tongue, and nation. Because humans were spiritually dead in their sin, the Holy Spirit opened their eyes, awakened them to their rebellion, pointed them toward the beauty of Christ, and caused them to repent, believe, and trust in Him. And it was this same Spirit, who also indwelled them, bringing Christ's spiritual life within them, once they believed. This was done because God is patient with sinners. He could have purged the entire world of sin as soon as Adam fell. He could have done this work personally in Christ when He came. But to do that, He would need to get rid of you and I. To cleanse the whole world of sin and to eradicate all the evil would mean that you and I would need to go. We have all sinned and fallen short of the glory of God.  But, instead of totally eliminating all evil, He puts up with wicked humanity, He allows diseases and sickness, so that He can kindly save sinners until He has saved every single one that He intends to save.

You and I have been saved by Christ, because God was patient with evil. So instead of throwing a middle finger to God and saying "why is their so much evil in the world? Why do things like Coronavirus happen?" Instead, turn to God in humility and say thank you! Thank you that you are allowing human evil and suffering for a time so that I and others could be saved.

STAGE 3: The FINAL Redemption and Restoration

When Christ has saved every sinner He intends to save, He will return. And when He does, He will do so physically. And the point of His coming is simple. While He has allowed evil and suffering to exist in this world for a time, so that all His people could be saved, He will come again to completely restore and redeem everything that is lost.

He will come to judge Satan and his legions, by casting them into hell. He will come to judge the wicked and the dead, casting them into hell, because they have refused to turn from their sins and follow Him. He will judge death itself, throwing it into the lake of fire. He will judge the fallen world, remaking it, perfecting it, restoring it, and healing it. He will judge sicknesses, diseases, back pains, Coronavirus, and other sin-induced maladies by making all things new! He will wipe away every tear and we will live with the triune God forever in newly perfected bodies, in a perfect and vibrant earth, for all eternity.

WHAT DOES THIS TEACH US ABOUT THE CORONAVIRUS?

1. Our sin caused diseases like the Coronavirus to exist.

2. God in His grace sent His one and only Son to save us Spiritually, which means we can have joy, peace, and hope while we suffer these kinds of things.

3. God, also in His grace, will send His Son to return, to overthrow evil and wipe away every sickness. This teaches us that our Lord is sovereign over little viruses like this and we must look forward with eager patience for Him to return and make all things new.

4. For all who are in Christ, every evidence of the curse will soon be healed and you will dwell forever with Jesus. Do not allow yourselves to be discouraged while you wait. Wait with eager hope!

5. If you are not in Christ, repent now before it is too late! While the Coronavirus kills roughly 1% of the people it infects, sin will kill 100% of all people it has infected. And guess what, that is everyone who has ever lived! So here is the point: you will either die eternally without Christ, or you will look to Him to rescue you spiritually while you await His return to restore you physically.


The Biblical narrative gives every answer we need. The question is... will we rest in that?