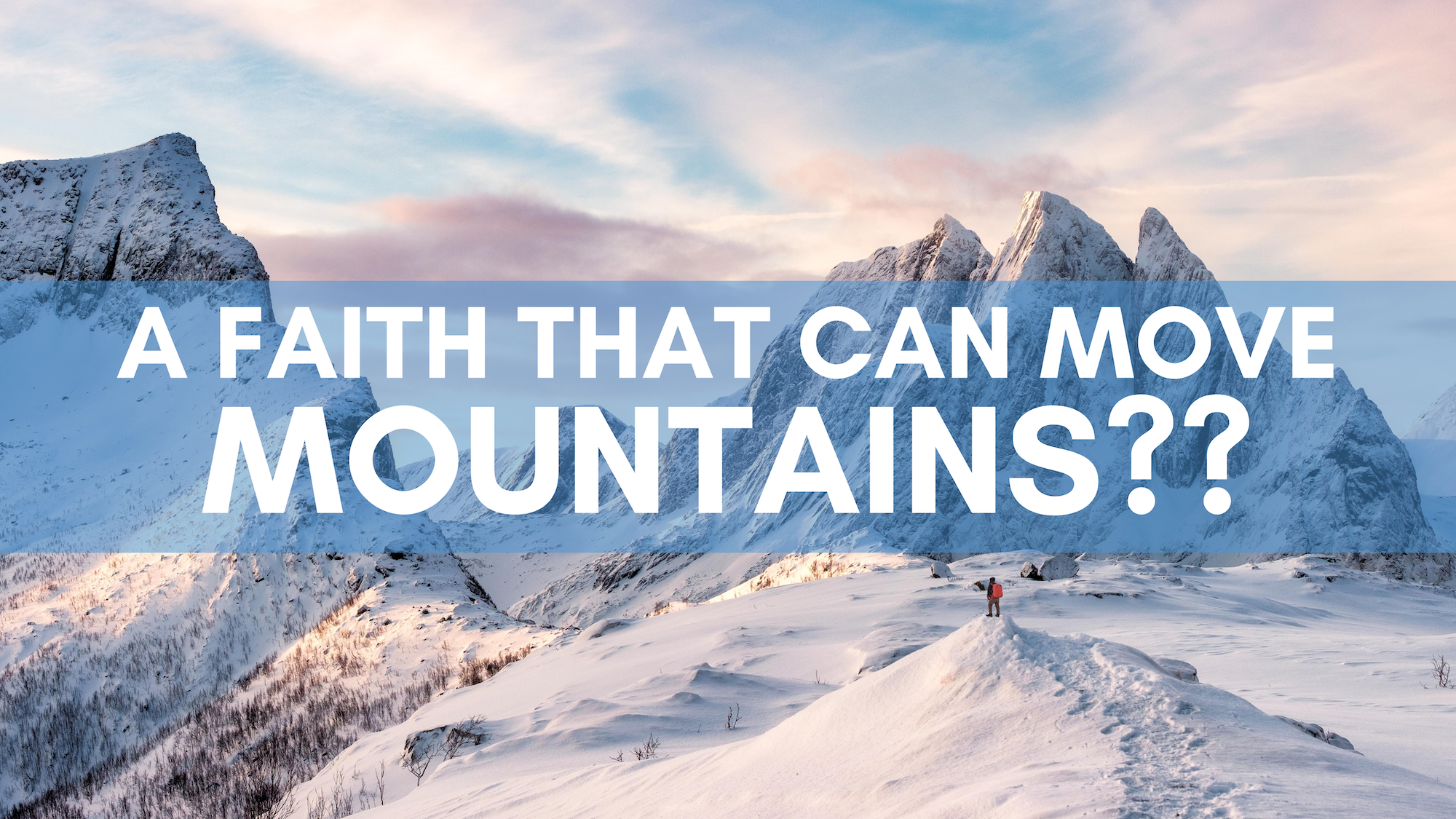 It is not uncommon for Christians to misunderstand a verse in the Bible. We are kind of notorious for taking verses out of context and turning them into t-shirts, coffee mugs, and rally cries. We almost effortlessly and joyfully develop theologies that have no textual warrant in Scripture and think we have done well. But have we really done well if we distort the Word of God?

For instance, if you have been a Christian for any time at all you have probably heard the phrase “a faith that can move mountains.” Sounds great, right? But what if that verse does not mean what you think it means? What if our Gentile ears have misunderstood the Jewishness of that phrase? What if we have ripped that passage right out of its context, applied it to our lives as a general truism, and have walked away feeling encouraged that we have understood the Bible… when in fact, we have not understood it at all.

This is an important issue. Many today look at a verse like this and claim “If I just have enough faith I can move that mountain in my life” as if Jesus was referring to a struggle we are currently facing as a metaphorical mountain. We think by sheer determination of our will we can move the peaks called finances, cliffs in the way of a better career, or that we should throw the boulders of bad health into the sea so we will be healthier, wealthier, and so much happier.

Yet, even though our flesh would certainly crave and applaud such a sensate and self-centered interpretation, this could not be further from what Jesus is actually saying. This passage, at least not directly, is not about you!

So then, what is it about?

In Matthew 21, Jesus comes to a fruitless city that only offered Him leaves (Mt. 21:8). That point should shock us. The next day, He curses a leaves-only tree that did not bear any fruit (Matthew 21:18-19) The metaphor could not be more striking.

But something was terribly wrong!

Jesus comes to a city that no longer looked like a garden but a wilderness. He came to a temple that was no longer producing fruit for God or giving life to its people. Instead, it was withering in total corruption (Mt. 21:12-13). He also came to a people who were left in their brokenness and diseases because the temple in its compromised state could not heal them (Mt. 21:14-16). So is it any wonder that Jesus dramatically curses a fig tree the very next day, signaling what would ultimately happen to this fruitless and dead city?

You see, just like the withering tree that would soon be removed, Jerusalem was a city that would soon be destroyed. That is not a matter of opinion but one of the firmest points of ancient history. In AD 70, just 40 years after Jesus uttered these words, the Roman armies assembled around Jerusalem; they sieged it, invaded it, sacked it, and burned it to the ground. Not even one stone was left upon another on that hilltop temple (Matthew 24:1-2).

Now, with that context, let us read the verses that are so often abused and attempt to rightly understand what Jesus is saying in proper context. In Matthew 21:18-21 it says:

18 Now in the morning, when He was returning to the city, He became hungry. 19 Seeing a lone fig tree by the road, He came to it and found nothing on it except leaves only; and He said to it, “No longer shall there ever be any fruit from you.” And at once the fig tree withered. 20 Seeing this, the disciples were amazed and asked, “How did the fig tree wither all at once?”

Jesus is en route back to the fruitless city that left God’s people spiritually starving. As a dramatic display of what would soon happen to that city, the hungry journeying Christ curses the barren fig tree and it is immediately withered. This not only showcased the spiritually dead state of the city that could no longer feed God’s people, but it also demonstrated the immediate and sudden downfall that was coming. A calamity that would render it fruitless forever.

Now, the disciples were obviously amazed at this and likely did not see the connection Jesus was making with Jerusalem. This, like today, is fairly normal among His followers. While Jesus is talking about something important His disciples are often left scratching their heads in total confusion. So, Jesus does what He often does elsewhere. He illustrates His main point with a secondary example so that the dazed and dazzled disciples will finally get it.

And Jesus answered and said to them, “Truly I say to you, if you have faith and do not doubt, you will not only do what was done to the fig tree, but even if you say to this mountain, ‘Be taken up and cast into the sea,’ it will happen.

Now, we must understand that Jesus is not taking a break from His main point to establish a very random word of faith / prosperity theology. He is not giving all the future Bill Johnson’s and Benny Hinn’s of the world ammunition to abuse God’s people in the exact same way He just condemned in the Pharisees! Remember, Jesus is angry at that kind of perversion (Mt. 21:12-13)

Instead, it is quite clear from the context that Jesus is making His main point even stronger with a good illustration. He has showcased Jerusalem’s downfall with a fig tree. Now He exemplifies it with a mountain.

Because Jerusalem was literally a city on top of a mountain. It was surrounded by valleys on all sides and to get into the city you would need to climb up to it. Furthermore, the temple was at the highest point and pinnacle of that mountain which meant that you could see it for miles and miles looming over the horizon.

So as Jesus stood speaking to His disciples about the downfall of Jerusalem, that cursed mountain would have been looming largely over top of them. It would have been an obvious point that Jesus was making for anyone standing there in the valley.

Jesus does not say, “if you say to a mountain” as if any old mountain, both physical and metaphorical would do. He does not say: “cast Mount Everest into the sea” or “cast whatever problems are in your life into the sea by faith.” No! He stands at the foot of Jerusalem’s mountain and says “Even if you say to THIS mountain”. Could it be more clear?

He has a specific mountain in view that will be destroyed and tossed into the sea. That brings us to our third point.

It is a matter of historical record that the Romans not only destroyed the mountain city in AD 70. They also killed about a million Jews, took nearly 100,000 of them into slavery, and also plundered the city, stealing everything of value in it. After plundering the city, they packed up the slaves and treasures, put them on ships bound back to Rome, and cast off into the sea in victory.

Jesus prophesied that THIS mountain would be cast into the sea. In AD 70 it was so.

Jesus is talking about the kind of faith it would take for Him to curse the city of God, to unleash destruction upon Zion, and fundamentally change the course of human history. From that moment on, no more fruit would ever come from the Jewish temple. Men and women would no longer travel to Jerusalem to know God. Sacrifices would no longer be offered for forgiveness of sins. That old mountain was coming down!

Jesus was going to lift that old mountain up by being lifted up on a cross. He would bring it down by being crucified on top of it! His sacrificial death, burial, and resurrection would signal a new era in human history where God would be known through Christ no matter where they physically lived, where fruit would not be produced in a temple but by the Holy Spirit’s indwelling, and where the old covenant religion would be cast into the sea and replaced by a relationship with the Living God!

Jesus’ faith unleashed His Kingdom of salvation upon the world. Standing in His way was the old covenant house that lay empty atop the mountain. In Matthew 21, Jesus prophesied it’s downfall.

It is my prayer that you would not use a verse like this to muster up big faith. I do not want you to believe that God is just waiting on you to reach a certain level of sincerity before He will answer your prayers. Have faith! Pray big prayers! Yes and amen! But, also realize that Jesus is not giving you a blank check to satisfy your carnal wishlist. He has done something better. He removed the mountain of religion standing between you and God. He made it possible for you to know the Lord.

So it is my prayer that this verse would cause your heart to sing and find its full satisfaction in Him.